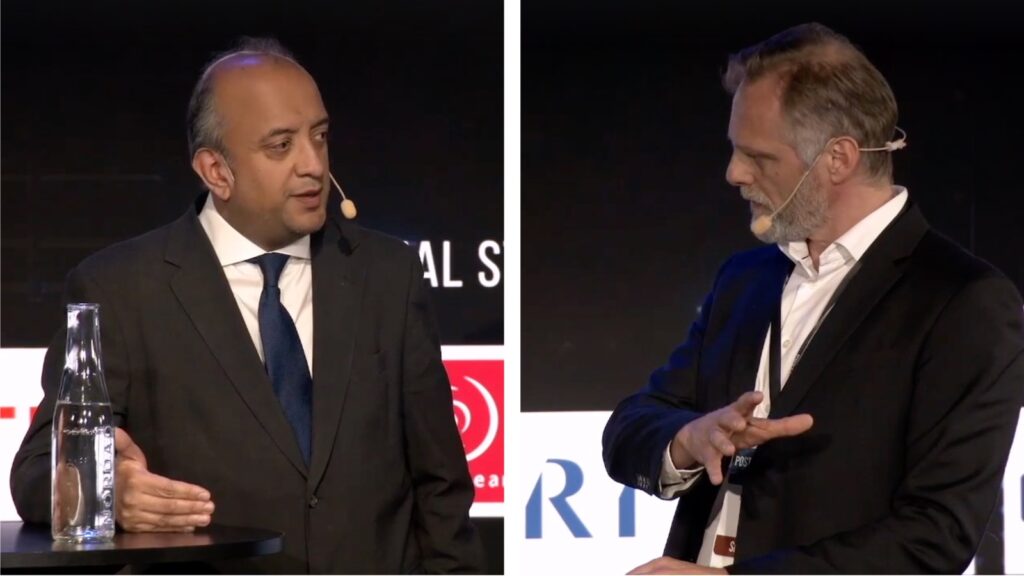 VIDEO | Only years from now, digitally tokenised assets could be in the trillions of dollars – but if you are an institutional investor who doesn’t want to bother about the technology of it, you should not necessarily have to. On stage in Stockholm last week, SWIFT’s securities strategist Vikesh Patel described the changes that his organisation is currently driving in the DLT area … and not least, why.

Let the dots in the player bar guide you to sections relating to huge five-year expectations for tokenised assets, the staying of basic financial principles but emergence of new ways to operate them, SWIFT’s work to bridge the platforms, the operational implications of trading vs storing value, the promising future for the unique trade identifier (“UTI”), as well as the seemingly successful bond settlement experiment with SETL, Northern Trust and Clearstream.

The multitude of competing technology platforms are one of the forces that hold market infrastructures and participants back from working with tokenised assets. Yet, initiatives including a recent one by SWIFT/SETL and others, seek to create an integrated market by making major DLT environments interoperable enough. Will they make it, if so when, and how does it mean we should act in our operations?

Messages turn into an orchestra

“Recently, at SWIFT, our strategy is very much to move towards an instant frictionless world, supported by transaction management, account-to-account, anywhere in the world. So within that, there are three components: There is the instant and frictionless path, which I think will be an ongoing journey, to try and make processes more efficient and bring more predictability into the market. The transaction management side is a big shift for SWIFT and the community, where we are building the next generation of SWIFT, where we’re moving away from point to point messaging to messaging orchestration,” says Vikesh Patel.

“So we are really looking at providing structured, predictable messaging that people can rely on through the lifecycle of that transaction. And in the securities space, that’s an important part for SWIFT; over 50 percent of our business is securities traffic, securities transactions. So why do I talk about those two elements and account-to-account? Well, actually, as we see the market emerging, we see a real role for not just technological interoperability, but to actually look at the standards, the protocols, the way in which tokenised assets communicate with potentially existing fiat rails, and existing financial institutions, and to make that process seamless.”

The need to get into technicalities could vary widely depending on whether your role in the market is to trade value or to store it, Vikesh Patel argues. In principle, the tokenisation could be used mainly for transforming the securities of today’s financial market. But in reality, he perceives that there a strong drive to generate new tradable assets – with new opportunities for trading profits.

“So if people want to drive for yield, if markets want to connect people up and facilitate that growth, then actually there’s two things to consider in post trade, in my humble opinion: The first one is ‘Are you in that asset, trading value?’ And if that’s what you’re doing, that takes you down a certain course of action. Or are you trading value and storing value? If you’re storing value, that takes you down a very different path – which involves CSDs and partnerships, which involves custodians and sub-custodians, which involves brokers and the ways that you all service your clients. And in order to make those assets used as they are today, in traditional assets, we absolutely see a role for SWIFT to help facilitate new forms of trading, settlement and digital assets with the traditional ways that trades have been happening and markets have been operating.”

Post Tags: Digital assetsDLTHugo SundkjerPostTrade 360° StockholmSwiftTietoEVRYTokenized securitiesVideoVikesh Patel
Alexander Kristofersson
Previous PostClearing is hot in the news – but will participants benefit?
Next PostAI, ML, RPA … Sure, they work, but how do we reap operational net benefits?