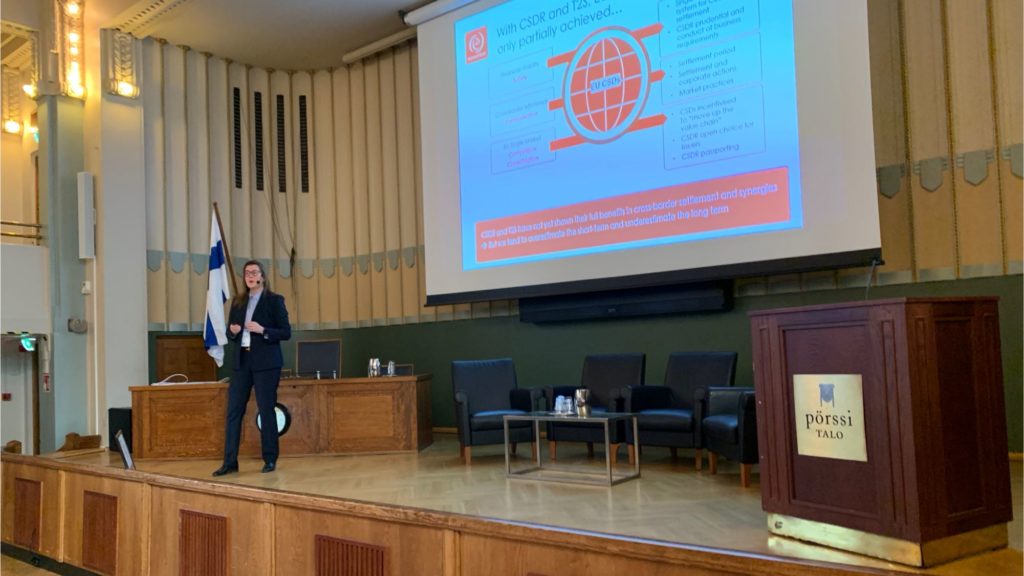 Finland’s CSD Euroclear Finland will shift its activities over to the pan-European Target2-Securities platform (T2S) in November 2022. The announcement was made by CEO Hanna Vainio at the start of the PostTrade 360 Helsinki conference Wednesday morning.

As the decision follows an ambitious anchoring process with the Finnish securities industry, it may not come as a huge surprise for those delgates most closely affected. Yet the official presentation of the news does contribute some momentum for the T2S project, which has had some challenges in getting up to speed. Previously, Denmark’s CSD, VP Securities, has launched on T2S.

The news was presented on stage by Hanna Vainio, CEO of her country’s CSD Euroclear Finland, as part of her Wednesday morning keynote on the evolution of the post-trade landscape in Finland and Europe.

Makes it coincide with ECMS

The choice of timing, to go operational in November 2022, serves to make the change simultaneous with the introduction of the new pan-European Eurosystem Collateral Management System (ECMS).

The ECMS puts the European Central Bank (ECB) rather than national central banks at the heart of the collateral system, but for ECB to acknowledge collateral the handling needs to be done on a T2S implementation.