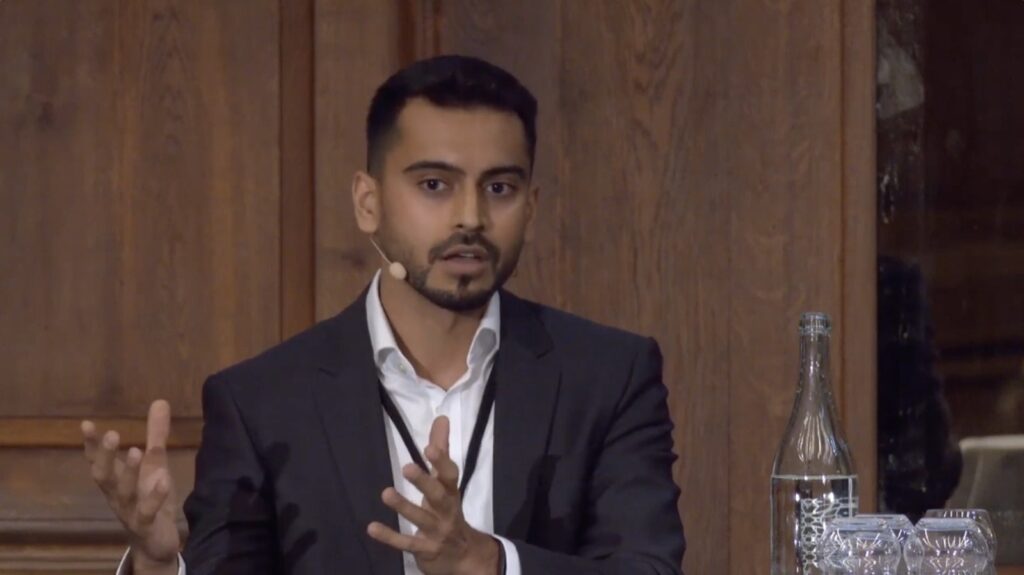 VIDEO | At first, DLT-based tools will grease the wheels of traditional processes. Yet, in the long run, “native” digital securities could uproot the need to maintain many of those processes in the first place. On stage at PostTrade 360° Copenhagen, Amar Amlani from Goldman Sachs shared the big picture of the industry’s road to becoming digital at its core.

Interviewed by operations senior Olaf Ransome, Amar Amlani – London-based executive director for digital assets at Goldman Sachs – detailed the difference between the two stages of tokenisation that he sees. He observed that for the foreseeable future, the industry will be needing both, looking at the gigantic back book of traditional securities out there.

“There is a very basic form of tokenization, which is where you take an existing security, you hold it, you immobilise it with an existing custodian, and you represent it on DLT as a token – and you’re moving that representation around. You’ve still got the underlying securities somewhere,” says Amar Amlani, pointing to the fact that traditional CSD coupons will still be paid out in traditional money (fiat) through the custodian.

“You’ve then got the new world, of natively issued tokens, which have all the same benefits as the former, but they also have the programmability, the smart contracts that were mentioned, etc, to automate all of that.”

As the new dynamics evolve in steps, so will the roles of the actors, Amar Amlani predicts:

“Obviously, in that first scenario, custodians and CSDs are going to be doing their existing role but also have the ability to start tracking ownership on-chain: once someone has immobilized the security, you can track the ownership piece,” he says, acknowledging that with some privacy elements layered on, they can also see the same thing and streamline reporting, etc. But with that “basic” form of tokenisation, that is as far as Amar Amlani sees it going.

“It will take time for people to get comfortable saying ‘Okay, I’m now going to stop looking at my traditional books of records, I’m going to use my node on this blockchain as the golden source of what’s happened. And hey, by the way, everyone else is part of this DLT network.’”

On the verge of the new world

Yet, as the fully-native form of tokenisation finally spreads, the changes to the roles of custodians and CSDs could be a lot more groundbreaking. (In the conference, the details of such native tokenisation had been discussed half an hour earlier, in this session with Agora’s Naveed Nasar).

“I think it opens up that world to potential new entrants, who want to take on that role of record keeping, of playing custodian or facilitate corporate actions,” says Amar Amlani.

“I think we are on the verge of entering into that world. We’ve seen the EU announce the DLT pilot regime, which creates a couple of new roles where things can be done on blockchain. We’re seeing more and more pilot regimes appear across the globe. I think there’s an opportunity there and everyone’s trying to take that opportunity and be the centre.”

Interoperability could tackle need for pre-funding

Like other talks within the four-interview “Block Block” in the Copenhagen conference, Amar Amlani’s came to discuss solutions for the lacking access to liquidity – as decentralised-finance trades depend on pre-funding, rather than delayed settlement as in the traditional world, and solutions with on-chain money that can move instantly is not yet mature enough for financial institutions.

“So you’ve got all these hops and steps that need to happen because at the moment there’s just not enough volume for people to be fully comfortable to say ‘I’m willing to sit long in this digital money token overnight and represent it in the same balance sheet line item as I represent cash today’. But we are moving in the right direction on those pieces,” he said, pointing to fintechs like HQLA-X and JP Morgan’s Onyx as providers of collateral and repo functions that give institutions better access to money in the new world of tokens.

“So you’re seeing these pockets develop. The next stage will be to see these things – which have developed from proof of concepts to being scalable – actually begin to interoperate with one another. I think this will then, fundamentally, come back to start tackling some of the points you mentioned, where it isn’t just reliant on pre-funding.”

• News around PostTrade 360° Copenhagen 2022, on 20–21 September, is gathered here.
• The conference info site, with detailed agenda, is here.
• By the way … are we connected on LinkedIn already, among the 2,500 post-trade pros who are? Follow us here.