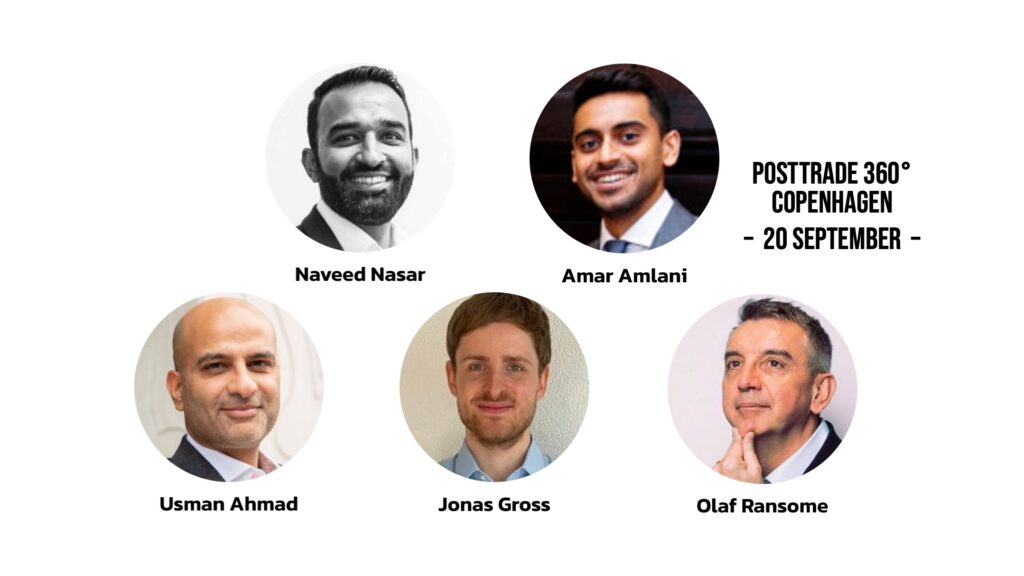 Meet these all-stars of the new post-trade world, in Copenhagen

Are you one of us all who try to grasp the fusion between traditional post-trade processes and the emerging distributed ledger technology? Then this 75-minute block of sessions in Copenhagen on 20 September is a spectacular don’t-miss. Come on site – or join digitally from wherever you are, free of charge.

We keep hearing that distributed ledger technology, such as blockchain, could change the way we do things post trade. In the afternoon of Tuesday 20 September, the first day of PostTrade 360° Copenhagen, we are proud to boldly step up our coverage of the topic – featuring five representatives from some of the world’s brightest-shining DLT initiatives that target sub-processes along the securities life cycle. We call it “The Block Block”.

After an introduction, four speakers will each be interviewed for 15 minutes about their work in different links of the trade cycle:
• Naveed Nasar, agora digital capital markets, on issuance,
• Usman Ahmad, Zodia Markets, on trading,
• Amar Amlani, Goldman Sachs, on settlement and custody, and
• Jonas Gross, Etonec, on “Money … or rather the means of payment”.

As moderator and co-producer for the block, we have the pleasure of hosting Olaf Ransome, also sometimes known as “The Bankers’ Plumber”. The majority of his career has been spent in traditional finance, largely in investment banking at firms including Salomon Brothers, Goldman Sachs and Credit Suisse, in London, Zurich and York. In the last five years, he has become an explorer of emerging technology and the world of decentralised finance, “DeFi”. Recent roles have seen him work with Fnality, which is looking at a means of payment of change (an alternative to CBDC) and with SDX, the digital exchange venture which is part of SIX Group.

Olaf is active on social media and even runs his own podcast series. His focus is on how the new, the worlds of DeFi and DLT will evolve.

“There is an emerging view here that there will be an ‘Era of Convergence’; no displacement, rather a coexistence of the old and the new,” he says.

Daniele Truini is head of PostTrade 360°:

“Being the post-trade conference organizer of the Nordics and Netherlands, we see it as our role to offer the arena for this meeting between the established professionals and the new capabilities,” he says.

“Our vision is to promote the innovation that this could bring – hoping that over the long run, it could lead to improvements for our target audience: users of post-trade services and systems throughout our region as well as globally.”

Over the last years, the PostTrade 360° conference has presented many DLT-related sessions with top speakers (including Grayscale’s Michael Sonnenshein, Northern Trust’s Danielle Henderson and Deutsche Börse’s Jens Hachmeister). Going forward, there is no decision to stick specifically to the Copenhagen event’s new “Block Block” format at other stops, but it seems likely that the topic will deserve continuous coverage in one form or another.