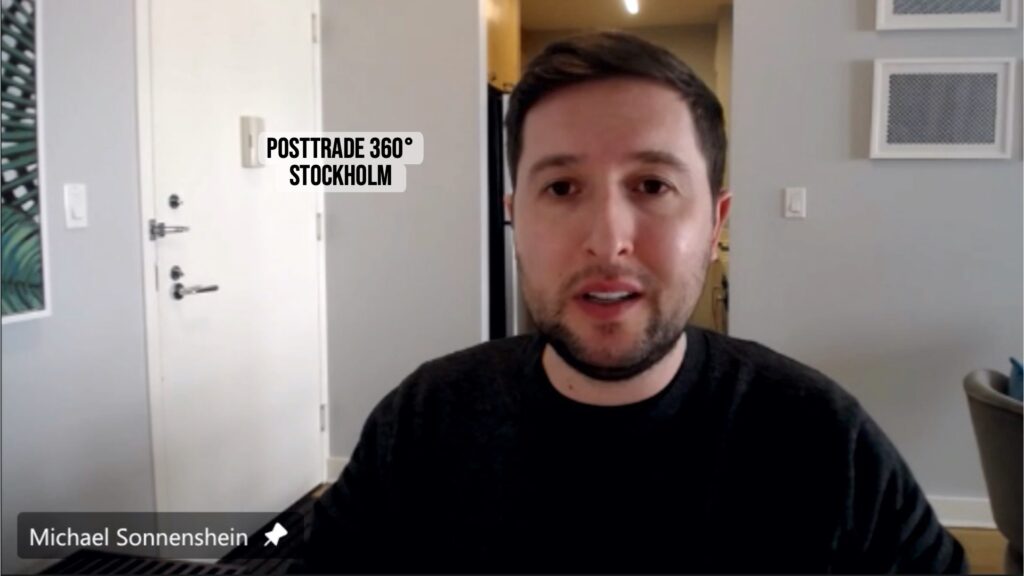 Two of the world’s leading figures in the institutional crypto area joined us for PostTrade 360° Stockholm in March: Michael Sonnenshein, CEO of $40 billion asset manager Grayscale Investments, and Michael Moro who heads Genesis – its prime broker and custody sister firm. Watch their session to get a grip on it all from your institutional perspective.

[This is an expanded version, now with the full-session video, of an article originally posted before the event. Note the white dots in the player bar, representing labelled sections of the video.]

One could debate the nature of cryptocurrencies, but one thing is beyond doubt: They are here – and asset operationals have to deal with them.

“I’d certainly say that over the past two to three years, we’ve seen a material uptick in participation from institutions, namely hedge funds, endowments, pensions, and now even corporates,” says Michael Sonnenshein.

Michael Moro of Genesis points to how the institutional rigging around bitcoin and other cryptocurrency assets is now maturing rapidly – in stark contrast to the reality when his company started out less than a decade ago:

“Ultimately, I do think that there is going to be an effort around a centralised clearing house to help settle transactions. There’s lots of non-custodial models appearing in the cryptocurrency space today so I do think the industry will continue to move and evolve.”

A lot could go wrong

Asked by Olivia Vinden what is keeping him up at night, Michael Moro makes clear he could make the answer long.

“The panel is probably not long enough to cover the list of things that could potentially go wrong in the asset class, right? Our lending business is over $7 billion. So we have $7 billion of loans outstanding, denominated in both crypto and US dollars. Certainly, we have collateral and we have lots of strict underwriting guidelines. But that situation … it can always happen.”

The constant threat of hacking, and the underdeveloped state of the insurance market, are other issues that Michael Moro observes.

Institutional adoption is ticking up

Michael Sonnenshein argues that despite the recent price runs, institutional investors could still view bitcoin as “ripe for opportunity”.

“Don’t think about bitcoin’s success or failure as to whether or not you can buy a cup of coffee with it in the next year, because you probably will still not be able to, but rather look at other measures of adoption and growth. Look at how many corporate players are adding bitcoin to their balance sheet of reserve assets, look at how many financial services firms are getting involved in the space, looking at how much of the pipes and infrastructure is being built around the asset class,” he says.