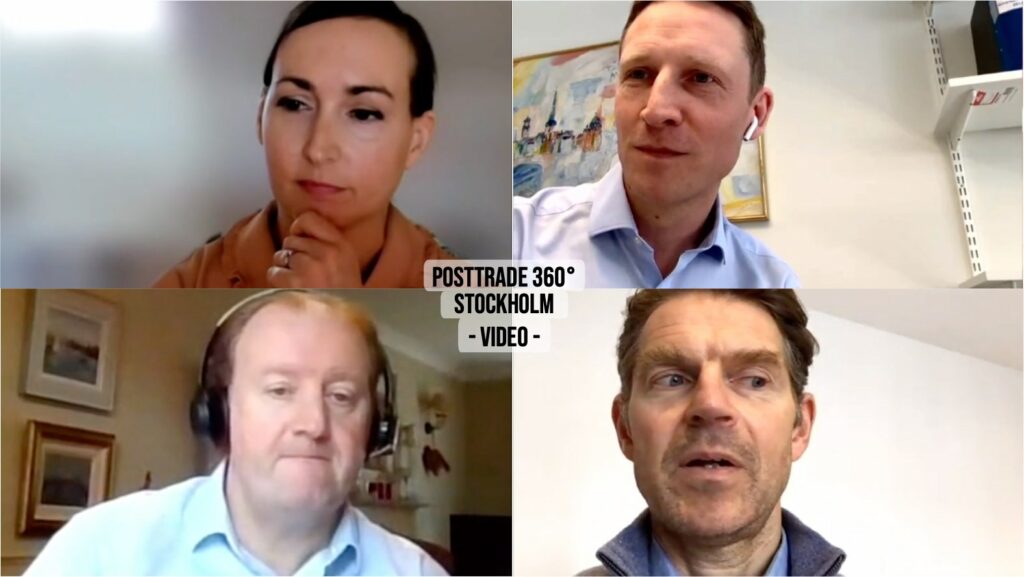 Panelists from three clearing houses shared a positive outlook for the region’s OTC derivatives clearing market, as they met to talk at PostTrade 360° Stockholm. The full session is here.

“I think Nordic OTC clearing is going to continue and grow – grow in terms of size and volume but also, I think, in terms of products and complexity and the solutions that the market want,” said Brendon Bambury, head of international client relationships and sales at SIX’s clearing business.

In the PostTrade 360° Stockholm 2021 conference, late March, he shared panel with …
Julia Haglind, president of Nasdaq Clearing, and
Philip Whitehurst, head of service development for LCH’s rate business.
The discussion was led by Gabriel Vimberg, head of derivatives clearing at SEB.

Clearing houses have largely been on the winning side of EU and world regulation, since the financial crisis around 2008. Regulators have incentivised market participants to bring their counterparty risks to clearing houses, as a way to get them under better control overall.

“Of course i’m a bit biased but I do think that the winds are still blowing in the direction towards central clearing. We see, for example, that Nordic institutional investors such as pension funds increasingly choose to clear their OTC derivatives irrespective of whether they are actually legally bound to do so or not. We all know that these funds control significant assets – and risk management is of utmost importance for them – so naturally, clearing represents an excellent tool for that risk reduction,” said Nasdaq Clearing president Julia Haglind.

“In terms of what I see ahead from our overall perspective, and you’ve probably already heard that I am optimistic that central counterparty clearing will increase, I personally hope to see an even bigger inflow of especially SEK IRS volumes,” she continued.

Philip Whitehurst pointed to the balance between regional and global business in the area.

“On the voluntary side, the thing we observe – in common really with all swap markets and all the most efficient markets – is that you’ve got a really interesting mix. You’ve got great international involvement in Swedish, Danish and Norwegian kroner, so those markets are, if you like, the majority of the business going on in those markets – maybe not by ticket count, but by volume it is international. And, by the same token, the players in those countries are looking to trade internationally, so they want access to US dollars, they want access to Canadian dollars, Aussie, yen …,” he said.

“In keeping with the patterns you see in many places, you’ve always got to, you know, bend as as much as possible to local idiosyncrasies and deal with some of the features that are specific to a marketplace. But at the same time, again, if we look at one of those central public goods that clearing can bring, it’s a lot about standardization.”

SIX’s Brendon Bambury was asked by moderator Gabriel Vimberg if he is seeing even more regulatory push for clearing coming in.

“Do I see more regulation? I kind of hope not. There’s a lot of tools in the regulatory toolbox already, which is doing the job. It is mitigating risk, it is driving better practices, it is moving, say, hidden trading into a transparent arena. And I think if you turn around the market and say ‘Do you want some more regulation, guys?’ … it’s gonna be a fat … you know. I think we all recognize this regulation is costly to implement. It has an impact into your back office, your technology and your software. And, you know, I think we’ve got the right amount of regulation, rather,” said Brendon Bambury.

One politically sensitive issue at the moment is the emerging EU policy on the location of clearing, after the UK’s exit from the union. Julia Haglind said she would not want to make comments as such, but went so far as to share her impression of where the process is currently at.

“The EU regulators have stated that the current situation where the majority of the OTC market is cleared in the UK is not viable, as you know. And the EU commission is working on trying to convince the market to shift some volumes, basically in EU currencies into EU CCPs. They have established a working group with other EU institutions to identify the issues, to do this market shift. They’ve had two calls, as far as I know, with representatives from CCPs’ sell side and also from buyside, to discuss these issues where we have also participated from Nasdaq Clearing’s side. So at least from what I hear from from these calls, is that the message is going through to buy side firms in Europe and that they are starting to act to ensure that they’re not caught up in a situation where the market suddenly moves. So some buy side firms are setting up accounts with EU CCPs through their GCMs [General Clearing Members]. Some just leave them empty, some use them to clear new transactions, and some have even moved their whole portfolios out of the UK. So this is at least what some global GCMs stated on the most recent call with the EU Commission,” said Julia Haglind.

“I also think that the buy side firms have a big role in deciding where the clearing is going to take place. That’s at least what the sell side firms are saying.”