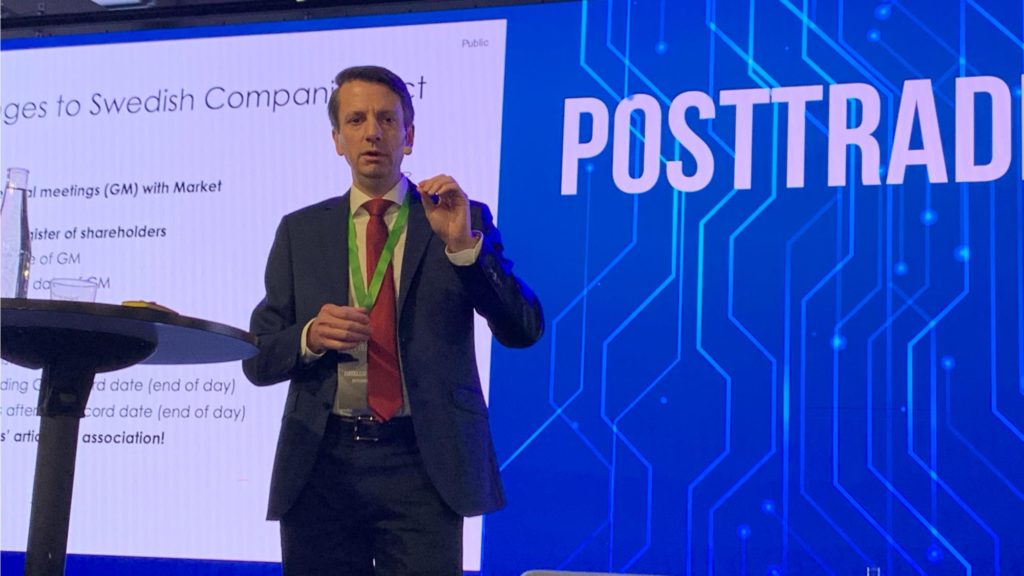 Presentations by Euroclear Sweden’s Mats Gunnarsson and Peter Kraemer, respectively on the upcoming implementations of SRD II and CSDR with its controversial settlement discipline regime, started the regulatory track in the afternoon of PostTrade 360° Stockholm. A discussion on the liquidity impact of CSDR’s buy-in rules followed.

Mats Gunnarsson pointed to the fact that key terms such as shareholder and intermediary are lacking formal definitions in Swedish law. Important regulation is being left to future legal practice. And notably, since the directive still remains to be transposed into Swedish law, the regulatory text is not even finished.

Compared with the first Shareholder Rights Directive a decade earlier, SRD, this second edition is expanding the scope of rights – from focusing on general meetings, and just administrative rights, to actual economic rights for the shareholders.

The briefs on SRD II and CSDR were followed by a discussion on how the new buy-in rules under CSDR, effective February 2021, can be expected to hit the liquidity and efficiency of the securities markets.

Well, increasing operational cost could be a qualified guess. Heiko Stuber of SIX and Erik Einerth of the Swedish Securities Dealers Association discussed the controversial upcoming buy-in rules under CSDR, in an afternoon session of PostTrade 360° Stockholm on Thursday. Tim Sundberg of PA Consulting Group led the session.

The agenda for PostTrade 360° Stockholm, at Hotel At Six on 20–21 February can be found here, and our editorial coverage will be gathered here.
You find our Linkedin posts from the event here – feel encouraged to click ”Follow”:
https://www.linkedin.com/company/18787020/
… and our more extensive articles on our news site:
posttrade360.com