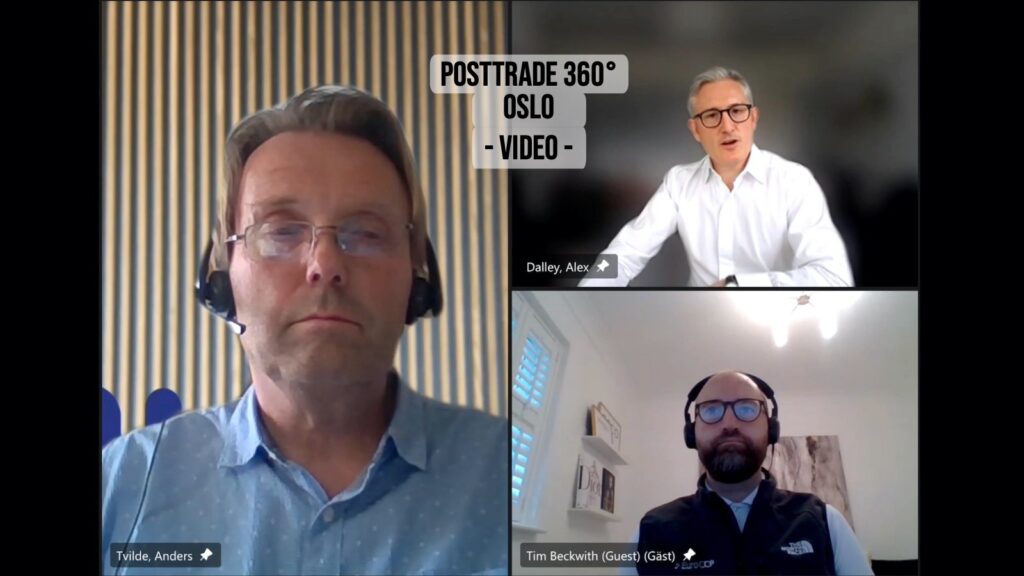 The impact of Brexit on trading and clearing in the Norwegian markets were subject for a session at Wednesday’s PostTrade 360° Oslo conference. Alex Dalley of Cboe Global Markets, and Tim Beckwith of its newly acquired subsidiary EuroCCP, were in the discussion, led by Anders Tvilde of Nordea. See the full session here.

Tim Beckwith is head of commercial services and business development at EuroCCP, Alex Dalley is co-head of sales, European equities at Cboe Global Markets, and Anders Tvilde is manager for sector and infrastructure at Nordea.

Alex Dalley started by describing how – as the UK and the EU failed to reach an agreement on financial services – European share trading restrictions came into effect from January 2021, preventing firms in the EU from accessing UK venues. In terms of lit order books – the biggest segment with about 70 percent of the trading volume – Norway’s trading seemed to follow the world outside, he observed.

“We have seen overall volumes, number-of-trades etc. stay pretty much in line with all the other markets through that transition, nothing particularly to report there. We have seen Oslo Børs market share decline through the transition, which is an interesting observation. They’ve transitioned from being around about 75 percent of the market in December, of lit trading, down to 66 percent in April, whereas the alternative venues including ourselves as the largest operator, have gone from 25 percent of the market prior to the transition to 34 percent in April. So there is quite a significant change, actually.”

While trading has been strongly affected by the Brexit-caused change this New Year, clearing is so far sheltered by a temporary recognition regime for another three years in the UK and 18 months in the EU (counting since January). Tim Beckwith drew a picture of the deceptive calm. Britain’s LCH, for example (being a competitor to Tim Beckwith’s EuroCCP in clearing), might need to off-board clients already in March next year, he pointed out.

“So what we saw in January with trading, and in March with Irish settlement … there is no such impact on the clearing at the moment, because we’re both protected with our temporary recognition regimes. But certainly, something is around the corner, and the market has to be prepared for that. And that includes the use of UK CCPs in the European Union, and here – to talk about Norway, the access to Oslo Børs is incredibly important to be reviewed by clients at the moment.”

Have you seen our 36-page event magazine? Download it in full (5 MB) by clicking here.
Click here to download our printable agenda as a four-page breakout from the magazine.
News from the event is gathered here.
Follow us on Linkedin here.

Alexander Kristofersson
Previous PostIn the future of banks, their money could be programmed
Next PostSocial barriers are there – here’s how he breaks them