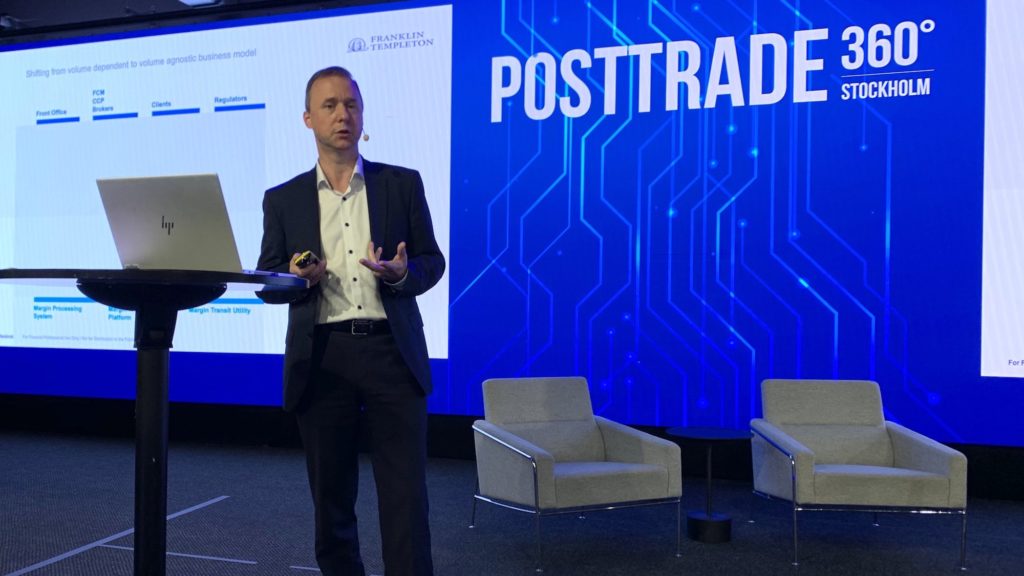 Structuring and automating the collateral handling at Franklin Templeton Services has increased the efficiency by multiples, but not only that. Krzysztof Wierzchowski, director of global trade services, tells how his function has entered a completely new role as innovative speaking partner to the middle and front offices. And as a cash generator.

100 million dollars in freed-up cash for Franklin Templeton’s hedge fund arm is one of the very tangible results produced by the Services organisation after its new collateral management systems have been introduced.

“Our case really proves that this function – which just a decade ago was based on excel spreadsheets and a few people trying to band aid the process – has now become almost integral to the middle and front office. Now we work very closely with trading and front office, and create new value for the whole organisation,” says global trade services director Krzysztof Wierzchowski.

Developing a much more scalable collateral process at Franklin Templeton might have been a good move. Only three days before he came on stage in Stockholm to present his case story, the asset management giant announced that it is doubling its assets under management by acquiring colleague Legg Mason. From sporting 700 billion dollars in assets under management, adding somewhat larger Legg Mason will bring the total to 1.500 billion dollars.

Krzysztof Wierzchowski begins his story just after the financial crisis of 2007–2008, as it was the direct force behind the establishment of the collateral function. It started as a highly manual exercise, with a team of around four people processing about 10 transactions a day using spreadsheets, e-mail and fax. The automation that has now largely been introduced is bringing the capacity up to 700 transactions a day, by a global team of about ten people.

“We used to have an insufficient and inefficient reconciliation process, and a lot of breaks. I don’t even want to remember what was our settlement rate, and how many problems we had.”

He does not seem to think that this was anything exceptional within the industry at the time.

“A lot of these things will probably resonate with a majority of you who had to deal with the collateral, because this was the reality,” he says to the conference audience.

“A number of different teams across our organisation – in business lines like front office, investment accounting, and risk – were reaching out to us with questions on the process that wasn’t really clear: Why do we have breaks in the accounting? Can you tell us what are the exposures, the movements, the cash available … ? Not even to mention the regulatory reporting.”

The path to getting everything under control is very long. Krzysztof Wierzchowski lists six foundation blocks: agreement setup, centralised processing, reconciliation, dispute resolution, settlements and regulatory reporting. But once done it means that the road further forward is well paved for automation and strengthened compliance. But also for increased ability to identify ways of adding value to clients, both internally and externally.

The first proof was when an analysis, based on the new system, showed that the front office could save millions by using securities, rather than cash, as collateral.

“Initially they thought ’hey, what do you know’. But once we showed them the calculation, and they allowed us to do it, we managed to generate $5 million for the front office in that first year.”

Strengthened by this, an even much larger opportunity to free idle cash was spotted in Franklin Templeton’s hedge fund activities, from a reduction of the so called independent amount. This eventually resulted in another 100 million dollars.

On one level, the rapid change to the work and the role of the back office, stems from regulation and technology. But Krzysztof Wierzchowski sees the key to success at the hands of the team. Half-jokingly, he describes how he saw one of his team’s analysts smiling on the Monday morning after the automation implementation.

“He said ’You know what, I am just drinking my coffee and looking at my screen and I see these transactions completing themselves. What a joy!’ That was a sign we were moving in the right direction, and the team was taking pride in what we were trying to achieve.”

The current straight-through processing level (STP) – that is, the proportion of transactions where there is no need for a human to touch anything – is 33 percent, based on the automation of AABS and bilateral OTC. The handling of cleared OTC, currently semi-automated, is up for full automation later this year, a move that could see the STP jump as high as to 78 percent.

“This means we don’t have to focus on the laborious tasks,“ says Krzysztof Wierzchowski.

“Not only will this have more analysts drinking more coffee and smiling more – they will also be able to focus more on activities that add value for our clients.”

The agenda for PostTrade 360° Stockholm 2020, which took place on 20–21 February can be found here, and our editorial coverage gathered here.