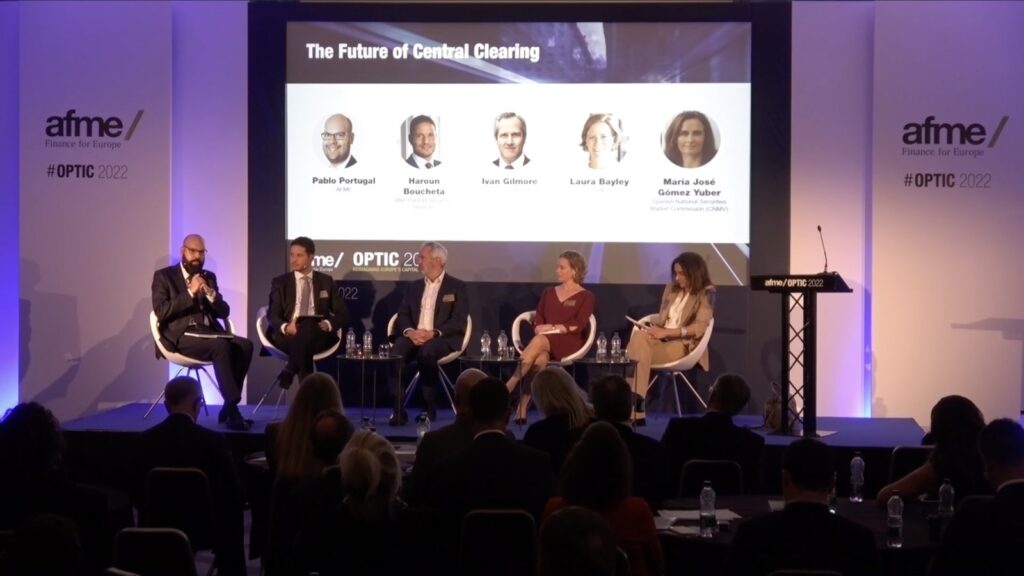 CCP owners could be made to pay more upon blow-ups

The biggest questions around Europe’s clearing were addressed, when AFME’s operations conference Optic in late September hosted a senior panel with representatives from clearinghouses LCH and SIX – as well as from the Financial Stability Board that is mulling tougher requirements on them, and clearing member BNP Paribas. Is three necessarily the right number of equity clearing houses? And could DLT-based T+0 settlement even make clearing unnecessary?

So-called bail-in bonds, committed resources from CCPs’ parent companies, dedicated pre-funded emergency funds, or even insurance policies … A number of possible new requirements to shore up the resilience of central counterparty clearinghouses, for the stressful scenarios known as “recovery and resolution” ones, were listed by María José Gómez Yubero of the Financial Stability Board, on AFME’s panel about the future of central clearing.

“Shocks could be even more extreme”

“We are living in turbulent times, in which ‘Black Swans’ have become the new normal,” said María José Gómez Yubero, pointing to how “recent and unanticipated geopolitical events demonstrate that shocks could be even more extreme than past historical events”. As a result, the Financial Stability Board, together with bodies CPMI and IOSCO, is reviewing the existing financial resources in CCP scenarios which are extreme enough to require resolution. (PostTrade 360° has previously covered the controversy around the risk distribution between CCPs and their members, for example here.)

While many may think of clearing as a slow-moving area, LCH’s Ivan Gilmore contrasted this against a long list of changes that have actually taken place over the last 20 years: competition on venues, trading, and CCPs, innovation in different ways, the move of over-the-counter products over to central clearing, new process efficiencies …

“These are lots of things that many members are using. That is really a testament to people working together to bring that innovation to bear,” said Ivan Gilmore.

Another topic for the panel was the competition scene. To move away from local clearing monopolies, the EU and other policymakers have encouraged equity-clearing regimes that enable either “preferred clearing”, where the two parties to a trade can agree on a different clearinghouse than the venue’s pre-selected one, or “interoperability”, where seller and buyer can each use their own favoured clearing service and these interoperate in turn. Ivan Gilmore pointed out that interoperability adds another layer of counterparty risk which needs coverage by up to double the initial-margin collateral from the clearing members. SIX’s Laura Bayley, however, clearly emphasised interoperability’s benefits for members:

“It has seen prices drop, as you mentioned, and it has allowed three CCPs from different jurisdictions to interact within each other, having a global framework. And I would hope that the policy objectives, that the European Commission has, would also take account of this, and continue to allow CCPs to access various markets – as it is very important for the competitive landscape of CCPs in Europe,” she said.

(The moderator raised the question whether three is necessarily the right number of leading clearinghouses across the continent – possibly with a hint to plans by the Euronext group to join the competition, by pan-Europeanising its acquired Italian CCP, CC&G, under the brand Euronext Clearing.)

Quicker settlement will be challenging in EU

As the US leads the way towards a standard settlement cycle on day 1 after the trade (“T+1”), as different from today’s “T+2”, many clearing participants reckon they will free up a large part of the collateral they keep posted as margin for their trades. As stakeholders regularly observe, the cycle shortening will be more complex to carry out through the 27-nation European Union, but the move is still expected to come after some number of years. Haroun Boucheta, of large-scale clearing-services user BNP Paribas, suggested getting EU-wide discussion started as soon as possible, together with policymakers, with a view to harmonising regulations and simplifying the environment for financial-market infrastructures.

The plus and minus of T+0

The long-term move after that, beyond T+1 – towards so-called atomic settlement, where the exchange of tokens for securities and cash takes place by coded logic on digital distributed ledgers near-instantly – would require entirely new processes throughout the trading operations. Haroun Boucheta weighed the pros and cons. In fact, actual counter-party risk would not even exist.

“So, in terms of clearing activities that would mean, maybe, not having CCPs anymore. I don’t want to speculate, because that future is a bit far. But what I see with the current environment, with the energy crisis and what we have seen in the past few months, is that we have very good financial-market infrastructures, and very good CCPs, as well as clearing members, of course. In that period of high volatility, CCPs were quite important. So, there is always the question: should we move quite quickly on such a T+0 project, given the resilience of the whole financial-market infrastructure environment? And I think it’s really an open question.”