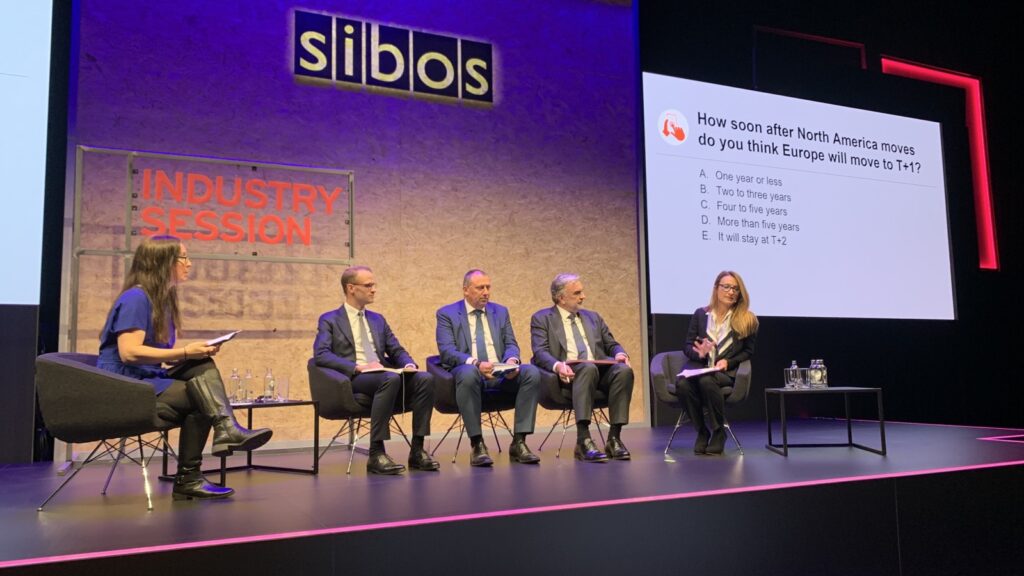 If T+1 takes many years, why not go straight for DLT?

If it takes many years for Europe to catch up with the US in shortening the settlement cycle to “T+1” … why not move straight to the next generation of technology? The question was raised as a senior panel at the Sibos conference on Monday looked into the challenge.

Moving from T+2 to T+1 sounds like halving the time window for doing the settlement job, right? But zoom in on the back office of the market participant, and it could shorten the timeslot by 83 percent, before the batch processing of settlements will begin, Julia Romhanyi of Unicredit pointed out.

She was on the Monday, called “Is T+1 the goal or a step to instant securities settlement?”, together with …
Pierre Davoust, Euronext,
Olivier Grimonpont, Euroclear, and
Javier Hernani, SIX, under moderation by
Virginie O’Shea, Firebrand Research.

An audience poll during the session showed half the audience believing in a European T+1 move after two or three years, counting from the US go-live. The panel seemed sceptical that it could go that fast, but appeared aligned that the current T+2 cycle cannot stay permanently if Europe wants to stay competitive in the global capital markets.

“You can’t sail against the wind. It is clearly the direction of travel,” said Olivier Grimonpont, Euroclear.

Javier Hernani, SIX, agreed that investment into the T+1 catch-up would make sense if it could be done quickly. But if it would take over five additional years, wouldn’t it be better to go straight for investments into the next generation of technology, the purely digital [DLT-enabled] process?

PostTrade 360° is on site Monday to Wednesday, posting a pick of news from the securities operations landscape.