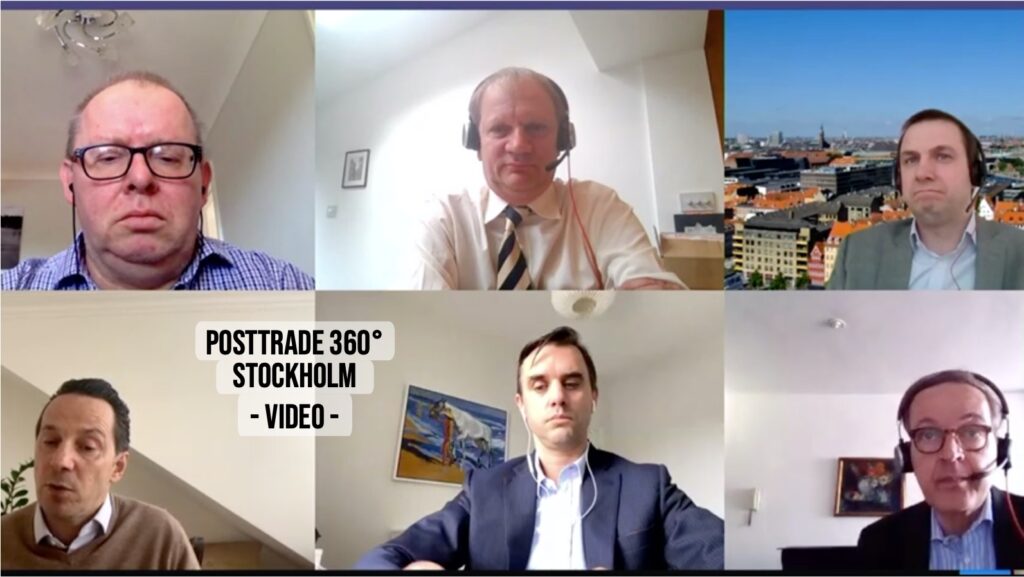 [Long read] Should central counterparty clearing houses pay the difference if a defaulting member fails to fulfil on its promises? Over years, CCPs themselves and their market participant members have had radically different views on that – and in PostTrade 360° Stockholm, late March, representatives for both sides met for a rare live debate.

[This is an extensive update, now with the full-session video, of the brief text originally posted on the live session day, 25 March 2021. Note that views expressed by panelists do not necessarily reflect positions held by their employers.]

“To put it bluntly, all the profits go to the CCP’s shareholders, and all the losses that stem from clearing go to the members that are forced to use the CCP,” said Rogier van Kempen, executive director at J.P. Morgan. (In the video player bar, find a dot for it at 21:08.)

The latter three all represent banks among the 19 market participant organizations who last year signed a joint 11-page proposal for greater responsibility carried by CCPs. (We wrote about it here a few months earlier when the number of signatories was 9.)

Moderator was senior industry profile Tony Freeman, with a background not least with DTCC. He noted early on that the skin-in-the-game debate is long-lived (likening it to tours by rock band Grateful Dead), and asked the panel if any resolution is in sight. There was little indication of agreement between the two sides overall, but Gert Ellerkmann of ABN AMRO noted the new regulation coming in in Europe, a fact that might help settle the dust somewhat.

“We now have the recovery and resolution regulation for CCPs; I think the level 2 texts on it are to be written,” he said.

Could pay for risks – outside of control

In the broader context, all panelists could agree on many aspects. CCPs have generally managed their job well during the most recent market crisis – a systemically crucial job, indeed. And they could all agree that the CCP owners’ own stake in the default reserves, called their “skin in the game”, is an important component. The question is how big the slice should be. It covers one level of the “waterfall” of money that should protect trading counterparties against losses if one CCP member would default on its obligations to them. First, the defaulting member’s own deposits are used, its margin. If that is insufficient, the CCP’s “skin” reserve comes into play – a measure to “incentivise” the CCP (or in plainer words: scaring it enough already before anything happens, to make sure it performs its risk supervision of its members properly).

But if this funding, too, proves insufficient, the rest of the bill is split on the “innocent” remaining CCP member firms, including many large banks. This fact leaves them with an itch that they are carrying a responsibility of an unpredictable size, for risks that are outside their control.

“You determine who the members are, you determine what is being cleared, how it is margined, and what is eligible for margin,” said Rogier van Kempen (18:45), addressing the CCPs through their representatives on the panel. “Effectively all the credit risk decisions are taken by the clearing house. Yet if, for whatever reason, these credit risk decisions to a certain extent may fail – and there is a loss over and above that of the collateral posted by the defaulter – it’s the other members that need to absorb those losses.”

“This discussion has been going on for some time,” he added. “So I think it’s probably right about time that there’s more regulatory guidance, or incentives, around this. And I think that the European regulators are definitely doing a very good job in doing so, together with some of their colleagues in Asia.”

It was pointed out several times that CCPs and their activities look very different – clearing various asset classes, in various markets and in various ways. No speaker went into specifying contribution levels that would be fitting. However, Rogier van Kempen gave a general view on the construction:

LCH’s Alex Krunic started out by detailing a long list of activities that CCPs, with his own one as example, perform to ensure that no trading member is being shortchanged by another (starting 6:30 in the video). In relation to the “skin” debate, he stressed the conceptual difference between the role of the CCP versus that of a bank.

“We are not banks. We don’t assume the risk brought to the CCP, we simply manage it,” he said.

“It’s really, really important that the purpose of a CCP’s skin in the game is to incentivize good risk management, not to cover the losses of a clearing member’s default.”

Alex Krunic also pointed to a risk of competitive disadvantages for European clearing houses versus those in the rest of the world.

“If we look at our counterparts in the US, there is no skin in the game.”

A tendency to “blur the lines”

WFE’s Richard Metcalfe, too, strongly emphasised the distinct role of the CCPs.

“There is a slight tendency in some parts of the policy world and some other parts of the financial services system, I’d say, to try to, sort of, blur the lines – or to blur the lines inadvertently, perhaps – between the CCP and a bank,” he accused. (In a previous interview with PostTrade 360°, Richard Metcalfe developed on this view, in the terms of “muddying the waters”.)

He sought to add nuance to the picture that clearing members, overall, are being forced into their clearing houses.

“I would take issue with some of the things that have been said here,” he said, towards the end of the session. “There’s a very limited number of things where you’re forced to clear and frankly those were things that were already being traded in huge numbers, and already being centrally cleared, at the initiative of the same banking community.”

Nordea’s Oliver Sjølin listed (starting 23:20) aspects of CCP risks that any member ought to be fundamentally aware of – including the capital resources (initial margin models and skin in the game), membership criteria and default management. The list also includes the CCP’s way of introducing new service offers, “products”, which could bring risks that are initially less well understood.

“When you decide to introduce a new product on your clearing platform – does that go through appropriate channels? I think it is very important that our clearing houses remain these fortresses of financial stability, especially in terms of crises. I think that means being on the forefront of risk technologies and risk innovation, but not necessarily always on the forefront of product innovation. So although it’s perhaps not as sexy to be streamlining and optimizing processes, I think it is very important that the clearinghouses focus on that, then maybe not always think of what new product can we introduce,” said Oliver Sjølin.

“Because as a clearing member, you are a member here because of the risk which you are already able to clear on this clearing house, not necessarily for a bunch of other stuff which may be introduced at a later stage. So as for risks to be aware of in a CCP, I think it’s very important especially for smaller members to be aware that yes, you are getting rid of risk here – that’s why you approach the CCP – but there is also risk associated with the CCP and it’s probably good to have a bit of understanding of how good the risk management practice of this clearing house is.”

Looking into the future (which was the theme for the second part of the session, starting at 29:10), Oliver Sjølin expressed his wish that more assets should be possible to use for the margin deposit at the CCPs. In the Nordic context, he saw the banks’ large pools of covered bonds as a particularly important resource to put in play.

On the theme of product innovation and its CCP risks, cryptoassets are currently a particularly hot topic. Later in the session (at 36:30) moderator Tony Freeman let J.P. Morgan’s Rogier van Kempen line out the implications as he sees them.

“Maybe CCPs should be a bit more conservative at the onset of launching a product, and maybe have some higher margins until any potential hiccups have been ironed out. It probably comes natural, because in the beginning you have lower liquidity and as a result you will probably set your margin a bit higher. But to this extent, we have seen one CCP that introduced some Bitcoin related products in the past and to bring more trust to the market they increased their skin in the game specifically for this product,” said Rogier van Kempen.

Gert Ellerkmann of ABN AMRO shared his expectations in the policy area, in the light of policy makers’ ambitions.

“I think they want markets to be safe and transparent as much as possible. Something they should also look at is supervisory cooperation. That is also a thing they work on, to avoid market fragmentation.”

In addition to the incoming regulation on CCP recovery and resolution, Gert Ellerkmann mentioned busy ongoing work in the area of “all the third country negotiations or the equivalence regimes across various jurisdictions and countries so that clearing members or clients can really clear where they want”.

“I think there are also standard setting bodies like the Financial Stability Board, who look at the equity and the financial resources of CCPs,” he added. “And I think this year, and also next year, will also be spent in looking back at the crisis exactly a year ago and what can be learned of it and what maybe could be improved in the in the system – which overall worked pretty well.”