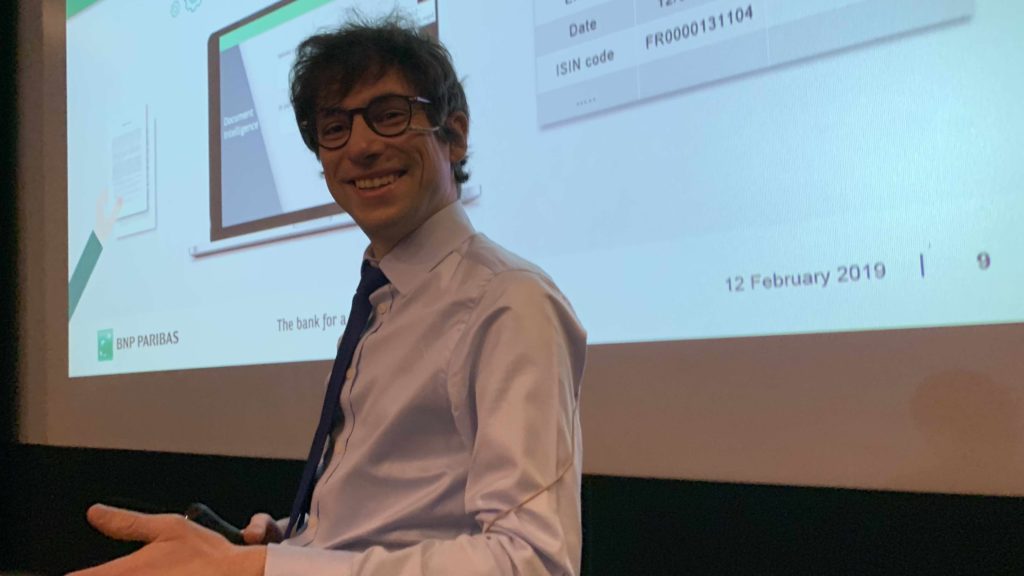 “These tools come in all areas”

The PostTrade 360 Oslo conference was, naturally, heavy on current technology developments. As part of an overview, Johann Palychata of BNP Paribas described how automated data extraction from documents make work easier for the people in the operations.

Johann Palychata, head of blockchain with BNP Paribas Securities Services, went onstage in Oslo Thursday morning. And while he did indeed discuss the developments in the blockchain area, he put just as much emphasis on digital processes which have come further into everyday implementation.

“We see these tools coming in all areas of post trade,” he said, referring not least to machine learning-powered tools for juggling data between texts and tables, and for predicting trade errors so they can be avoided.

Even when pdfs and other documents contain data which are not structured for digital reading, computers can now extract the data from them with high reliability.

In the example showed by Johann Palychata, a computer has read an invoice. It has concluded that by a 90 percent probability its date could be determined as 12 February. Its ISIN code is identified with full certainty. These data thus go into a structured format: a table.

Another data-structuring tool building on artificial intelligence one that does something of the opposite: turn large tables into human-readable texts. “This month’s volumes were considerably lower than usual,” writes the computer in Johann Palychata’s example.

“This is a big change. At the end of the day you want information in context,” he says.

The PostTrade 360 Oslo 2019 conference started Wednesday afternoon and would run through the Thursday. The full program and speaker list can be found here.