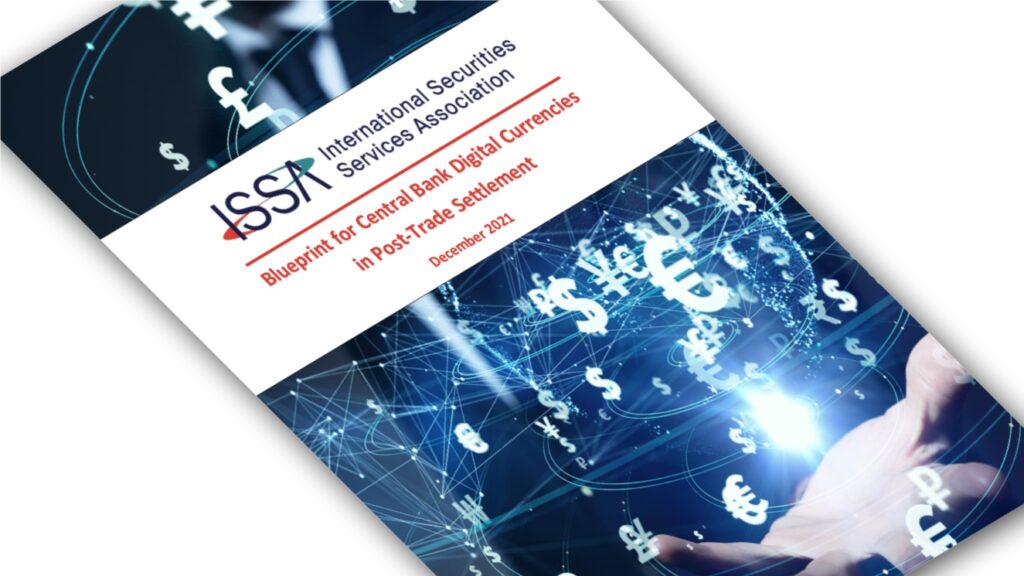 The DLT working group of the International Securities Services Association has published its “Blueprint for Central Bank Digital Currencies in Post-Trade Settlement” report.

Summing up the learnings from the number of central banks who have run digital-currency pilots (as well as some stablecoin projects in the commercial space), ISSA’s new report – downloadable here – sketches how a DLT-enabled future might look. For readers across the post-trade landscape, this generates lists of potential benefits as well as risks to be mindful of. While not an action plan, its framework could cut the starting stretch.

“While the use of DLT is not necessarily a prerequisite for a CBDC, this report has taken the approach of assuming DLT as the underlying technology for potential CBDC deployments,” the group notes in its foreword.

Potential benefits could occur on many points, including faster settlement finality, better liquidity and integrity, atomic settlement and reduced operational work to reconcile between many different systems.

One area where digital money could provide particular benefits is that of securities financing and collateral management, and the report lets a section cover it.

A singles out some tested CBDC architectures so far, such as Ubin (Singapore), Jasper (Canada), Stella (Japan) and Helvetia (Switzerland). In addition, central banks including those of China, England, Sweden and the ECB are getting ready to issue general purpose CBDCs in the next three years. According to the report, many projects have focused on technological concepts, however, staying silent or vague on other key aspects such as governance, permissioned versis non-permissioned setups, regulatory statuses or issuance details.

Beside this, a long list of risks is provided too.

Follows other studies and surveys

ISSA’s previous DLT-related publications include ”Crypto Assets: Moving from Theory to Practice” (2019), where chapter 3 was titled ‘Settlement of Securities transactions on DLT’. In the year after, the ISSA & Value Exchange DLT in the Real World survey was published, concluding that one of the biggest enablers of DLT adoption was the introduction of CBDC, an interface to a Real-Time Gross Settlement System (RTGS), or a stablecoin. Two rounds of a survey by ISSA has confirmed that CBDC is seen as the most viable option as a potential enabler for DLT adoption.