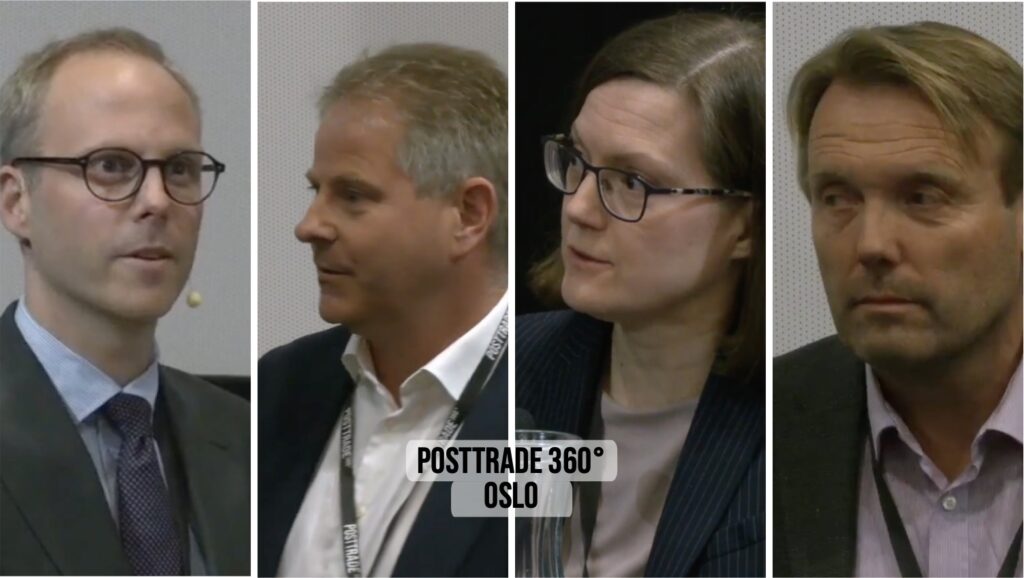 VIDEO | After some delay, we are now happy to publish this panel discussion from May’s PostTrade 360° Nordic conference – featuring knowledgeable representatives from Nordea, DNB, SEB and Euronext Securities Oslo.
“I don’t think this actually benefits investors to any extent that justifies the cost,” says SEB’s Christine Strandberg about the country’s CSDR implementation.

Notably, Norway’s securities supervisor Finanstilsynet (referred to in English as the NFSA) has added relatively ambitious requirements for the country’s CSD – Euronext Securities Oslo – when it comes to supervision of the account operators. It goes further than what CSDR as such requires, and panelists saw it standing out against other countries nearby. This is discussed in a section starting around 18:15 in the video, with Claus Koren of Euronext Securities Oslo lining out how account holders are now being asked for a self-declaration, to start with.

“From my perspective, this is one of those instances where the wider scope of the Norwegian implementation is not beneficial to the overall efficiency and cost structure of the Norwegian market. I don’t think this actually benefits investors to any extent that justifies the cost,” she exclaimed.

She pointed to a number of roles in which her organisation is already highly regulated and supervised (as a CSD participant, an account operator, a bank, a MiFID-covered investment operator …).

“As an account operator, we are allowed to perform registration on the CSD register, and yes: the CSD has a role to make sure that that we are able to perform those duties adequately. But this level … no! I do not really see the benefit of why the Norwegian implementation goes so far beyond the neighbouring countries with very similar models,” Christine Strandberg made clear.

“On top of that we have had a rule book since a number of years. Of course, with some changes along the way but we have adapted to that and we know exactly, first of all, how we should perform, and also the consequences of not doing so and the importance of it. So, in a way it could feel a little bit like some don’t trust us as account operators.”