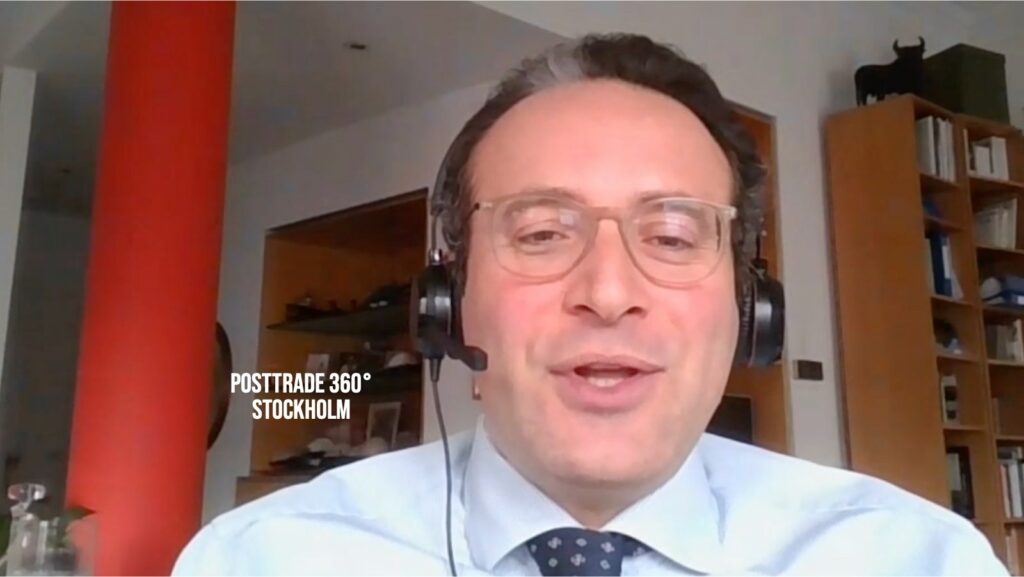 VIDEO | The European Commission is not hesitating to take an active role in promoting EU-based central counterparty clearinghouses (CCPs), against today’s “over-reliance” on UK-based ones. This was one of the key messages as Emiliano Tornese shared the view from his office at Tuesday’s start of the PostTrade 360° Stockholm conference. See his speech.

“We want to address the medium-term financial stability concerns for the EU that stem from our over-reliance on UK CCPs and to strengthen the Capital Markets Union,” said Emiliano Tornese in his presentation, via link, at the Stockholm event.

Three more years with equivalence for UK CCPs should be enough to foster the EU-based providers of CCP services into being able to take over the role currently played by UK CCPs. A dedicated working group driven by EU authorities has recently been put in place to guarantee that there are are incentives enough – both for EU-based CCPs and for the market participants who should be their clients.

“As for enhancing liquidity at the EU CCPs, we ask whether public authorities could play a role and how further market participants could be brought to clearing at EU CCPs,” says Emiliano Tornese, with reference to a recently closed public consultation on “possible initiatives to improve the attractiveness of clearing, encourage infrastructure development in the EU, and reform supervisory arrangements over EU CCPs”.

“We, of course […] need to consider carefully the implication of the United Kingdom’s departure from the EU, in particular in relation to the derivatives transactions entered into by EU entities, and importantly those denominated in EU currencies. Brexit has led to fragmentation, and it has also exposed some of the vulnerabilities in our financial systems linked to the dependence on market infrastructure outside the EU. This situation is just not sustainable in the medium term. So the Commission’s strategy on central clearing stems from the reflections made over the past year on how to reduce the over-reliance of EU players on third countries’ CCPs including through a dedicated working group,” says Emiliano Tornese.

“A range of possible measures may be necessary”

“As an outcome of this process, by the end of 2022, we will come forward with measures to make EU CCPs more attractive to market participants and, very important, to enhance supervision. Let me underline that the range of possible measures may be necessary to achieve our objectives, and we will assess in the coming weeks what the best options are. It is very important to have all of you on board in this process so it will be an open process,” he added, addressing the audience of around 400 people, roughly half of whom were in the room, the other half joining via the web.

Emiliano Tornese is Deputy Head of Unit for Financial Services and Capital Markets Union, Financial Markets Infrastructure at the European Commission. His topics on Tuesday included also a look at the postponed mandatory buy-ins of securities under the CSDR settlement discipline regime. While the proposal for them has been scaled back, he cautioned against seeing them as off the table.

“The situation needs to improve, one way or another,” he said, with regard to the settlement failure rates, and emphasised that mandatory buy-ins could still target chosen classes of securities where incentives are seen as most badly needed to drive the improvement.