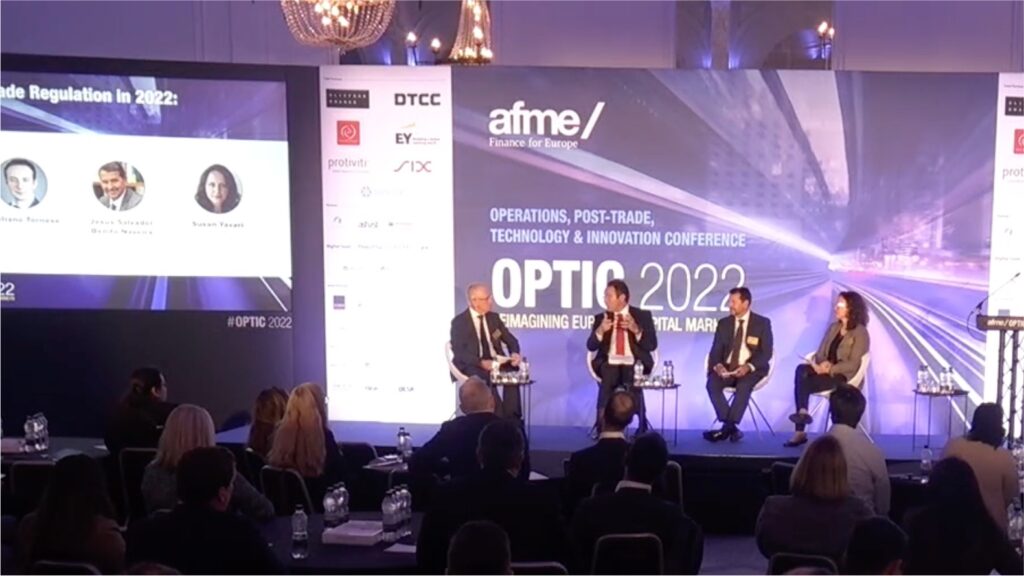 Taking part in a panel at AFME’s operations conference in London on Tuesday, Emiliano Tornese of the European Commission made clear that the results of the CSDR settlement discipline regime have not been good enough across the industry so far.

“I have to say, and this is basically confirmed by some data, that it is not working as we hoped in terms of market discipline,” said Emiliano Tornese, deputy head of the European Commission’s financial markets infrastructure unit.

He shared the panel with Jesus Salvador Benito Naveira, head of domestic custody and TR operations at SIX, and Susan Yavari, senior policy advisor for capital markets with the European Fund And Asset Management Association (EFAMA).

Having introduced reporting requirements, and cash penalties for settlement failures, the EU has stayed back from its original plan to launch mandatory buy-ins. Such buy-ins would replace a missing security when the selling party fails to deliver it after a trade but have been heavily contested by the securities industry.

“Will it ever be implemented? Well, that depends on you,” said Emiliano Tornese, while acknowledging that the tool is still controversial also on the political level. In any case, the plan is now scaled back to a more focused intervention, pin-pointing “certain financial instruments or certain transactions”.

Jesus Salvador Benito Naveira shared his impression that penalties do have a positive impact on the settlement rates.

I don’t know about the other markets, but I can tell you about the Spanish market: We have seen quite a significant increase in settlement efficiency, especially in the equities market and especially with the bilateral trades. We have experienced a significant increase, between 4 and 10 percent of increase, in settlement efficiency in the equities segment, which is very significant”, said Jesus Salvador Benito Naveira.

“And to be honest, it’s not a surprise, because before  the equities reform in Spain in 2016, we had quite a significant high-penalty regime for the equities. And the settlement failure rate was very low then. As soon as we moved away from that penalty regime, and until this implementation, we saw a significant increase. Now there are penalties again, and I’m sorry to say but sometimes the stick is better than the carrot and I think that’s the case. For us, it’s positive in terms of settlement efficiency.”

If I just give my two cents on what my members lived through with cash penalties, I think there were two issues that kind of jumped out at us. The first is that, ultimately, you’re dealing with 27 different legal frameworks, so, the degree of harmonised approach that you can achieve is limited, right. So, I think we tried as an industry to best guide members into understanding how do you apply these penalties and credits, are they going to be applied at fund level, or at management company level, what’s the role of the custodian …? All of this was debated over but I think we ended up with a patchwork and that’s the best you’re going to get. So that’s one aspect,” said Susan Yavari.

“The second is that some of the testing was quite late. By the time we had go-live in February 2021, some of the CSDs hadn’t had their dry run, so, it was a bit erratic in terms of the implementation. And I think, in the months that have preceded the go-live, we had noticed that there were significant problems. They were still ironing through those problems. So we had, you know, late reports, incomplete reports, and difficulty reconciling some of the data coming through.”

Susan Yavari argued that an assessment of the cash penalties would need to take two things into account: first, a long and unstable phasing-in period; second, that the implementation has coincided with a major geopolitical crisis, making it impossible to compare before and after on equal basis.

The discussion was moderated by Marcello Topa, director of EMEA market policy and strategy for securities services at Citi.