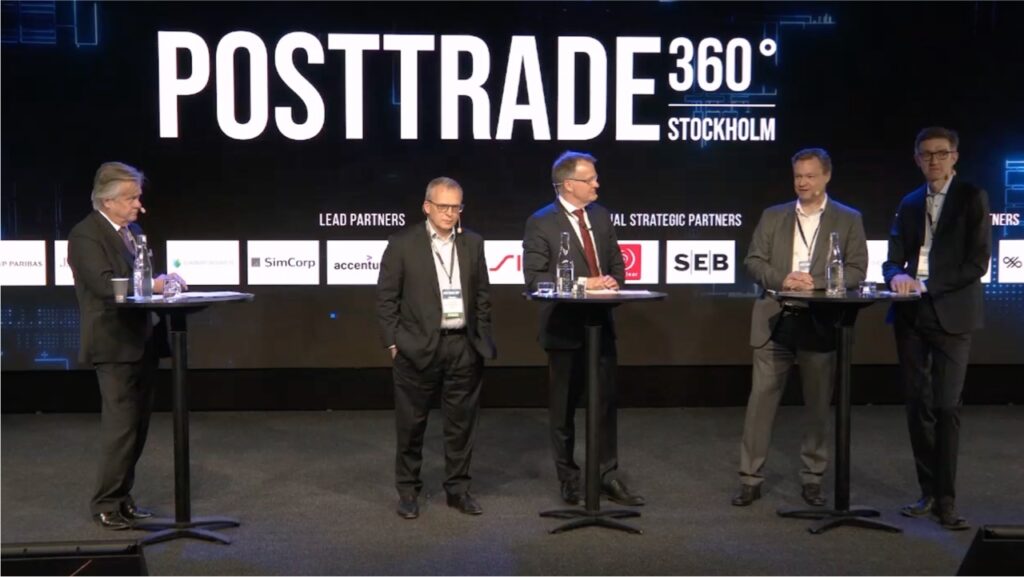 “Sweden has lagged behind on harmonization”

VIDEO | Promoting competition in Sweden’s securities settlement, between central securities depositories beyond current solo skater Euroclear Sweden, is one of the main purposes behind central bank Riksbanken’s decision to prescribe using the pan European T2S system. The opening session reflected many views on the topic.

Many things are good about Sweden’s securities infrastructure, but harmonization with the rest of Europe is lagging. Changes are needed, but we should be careful to not throw out the baby with the tub water.

This was the overall impression as five stakeholders met on stage to discuss the topic.

“Things are not so bad up here … Looking from outside, Sweden is a successful shareholder capitalist economy,” said BNP Paribas’ Alan Cameron, who is generally based in London but representing a Paris-based custodian.

Crucial changes are taking place. Riksbanken deputy governor Martin Flodén made clear that a recent decision for Sweden to move towards T2S had been taken based on a view that harmonisation has proven to go too slow without it.

“Now it is evident that the market is changing, both when it comes to payments and infrastructure, and the European market is integrating more and more. If markets are going to be open to competition it would be complicated to have the current setup with more actors than Euroclear,” he said, adding explicitly that Sweden is now lagging behind.

Göran Fors of SEB – the conference moderator, doubling as panelist specifically for this session – emphasised the importance of getting all the way on cutting costs in the infrastructure, despite rising challenges for example on cybersecurity. He is not appearing convinced about the ability of a T2S migration to deliver on that account.

Europe’s CSD space is under transformation from national monopolies to open-market competition, with the four big Nordic markets split between the Euroclear and Euronext groups. The session’s boilerplate in the agenda listed a number of the many trends currently rolling in:

• the settlement discipline regime just went live
• the pan-European T2S platform is on track for implementation, in an effort to unify capital markets
• the trends towards harmonization is challenging the regional specialty: the segregated account structure
• the idea of shortening the settlement cycle to T+1 is gaining momentum,
• on the horizon, distributed ledger technology could promise/threaten to replace pretty much the whole thing.