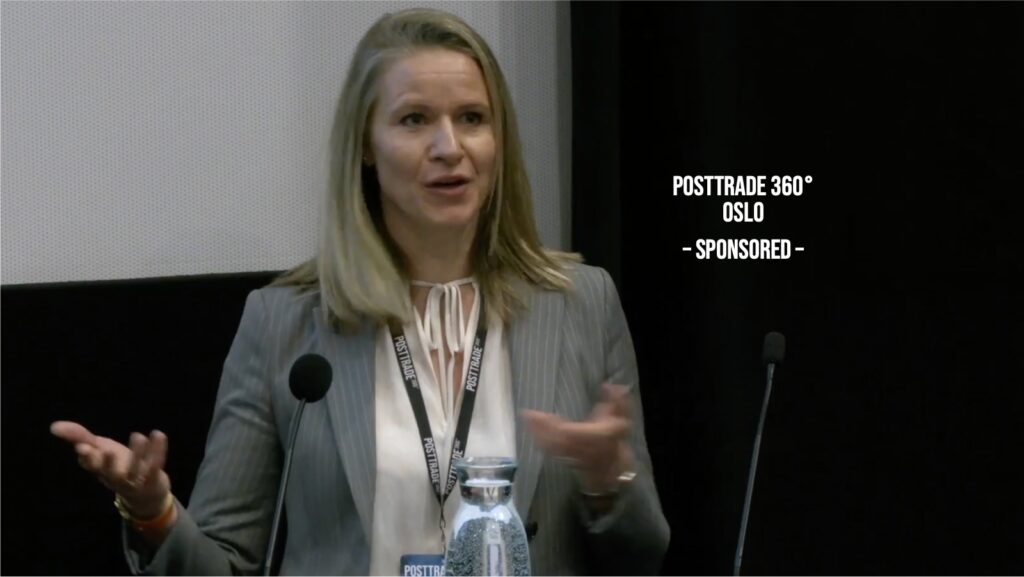 VIDEO | As the new CEO for Norway’s central securities depository, Kristine Bastøe finds herself near the centre of the Euronext group’s effort to build a pan-European CSD structure. In this half-hour session, see her being interviewed by Tietoevry’s Hugo Sundkjer.

The session was sponsored by Euronext.

It was in 2019 that Euronext – Europe’s largest financial markets operator, hosting exchanges including Paris, Brussels and Amsterdam – took over the hitherto independent Oslo Børs. Norway’s CSD, VPS, was in the package, and has since been renamed Euronext Securities Oslo. Since 1 March, it has Kristine Bastøe as its CEO, taking over after Audun Bø.

“I must admit that it has been a busy two months”, she says, on stage with PostTrade 360° Oslo on 5 May.

“When I entered into the role, we also started operating under our new CSDR license, so that was a big change. We had the war in Ukraine, and that hit us all. We had to implement the sanctions. We went live with the [CSDR] settlement discipline, just to mention a few things. And that’s on top of me settling into this role.”

In the day’s opening session, just before, Oslo Børs CEO Øivind Amundsen had described the rapid integration of the trading venues into the Euronext group’s technical and organisational structure. In contrast, on the CSD side, there is no such pre-existing framework – so that is what the group is now determined to build. VPS was Euronext’s second CSD, joining that of Portugal.

“Before acquiring us in Oslo, Euronext was mainly an exchange group. But when acquiring us, suddenly they had two CSDs in the group. And then, as you know, this has accelerated and we now have Copenhagen and Milan as well. Obviously, we don’t have a plug and play organization or technology to move into – so we are building that. That is what this strategy is about: to build this organization and the common technology where it makes sense. To leverage the CSDs across the group, and build something bigger.”

Through the white dots in the video player bar, or the special chapters button, you can quick-skip to content themes as follows:
0:00 Kristine Bastøe on her own background
3:22 Euronext’s new CSD strategy
5:13 Harmonisation – on two levels
8:53 Collaboration to pave way for US instruments
11:05 A big corporate-actions platform project
15:10 Some local flavour could be lost
17:14 T2S: “Wait and see”
19:14 DLT: “For sure!”
20:05 Hiring younger people
23:16 Kristine’s personal 3-year agenda