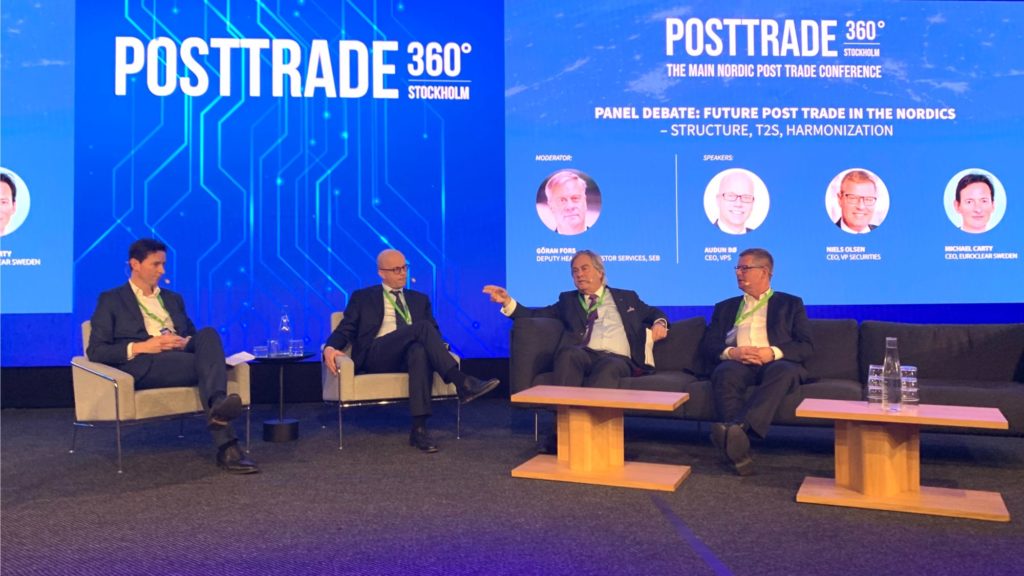 Joint working group next for the Nordics’ CSDs

Is the PostTrade 360° Stockholm conference catalysing Nordic CSD harmonization? Could well be so.

Thursday morning saw a rare on-stage meeting of the CEOs of the central securities depositories of Sweden, Norway and Denmark – as conference moderator Göran Fors led the discussion between Euroclear Sweden’s Michael Carty, Norwegian VPS’ Audun Bø and Danish VP Securities’ Niels Olsen.  And later today, they will take the opportunity to discuss the need for a working group to tackling incoming regulations in a coordinated way. Such a collaboration could also be expected to include Euroclear Finland.

“It is important that all of us talk about all these things,” said Audun Bø, who sees segregated accounts as likely to stay in Norway.

“The Nordic CSD model is efficient, but guess what – it doesn’t matter, since all of the EU regulation activity is building on the models of central Europe,” said Michael Carty, CEO of Swedish CSD Euroclear Sweden.

“Regulatory discrepancy” is but one of the many challenges. Current change drivers include CSDR, with its settlement discipline regime not least, as well as “P27” project, and the move to Europes new T2S system pioneered by Denmark’s VP Securities.

According to VP Securities’ Niels Olsen, EU regulatory authority ESMA is actually releasing quite detailed QnAs – actually soft regulation – without having all the right knowledge to do so.

On the wish list for the future, Niels Olsen put lowered capital requirements for CSDs.

Michael Carty agreed: “I am carrying one year’s revenue in capital.”

The agenda for PostTrade 360° Stockholm, at Hotel At Six on 20–21 February can be found here, and our editorial coverage will be gathered here.
You find our Linkedin posts from the event here – feel encouraged to click ”Follow”:
https://www.linkedin.com/company/18787020/
… and our more extensive articles on our news site:
posttrade360.com