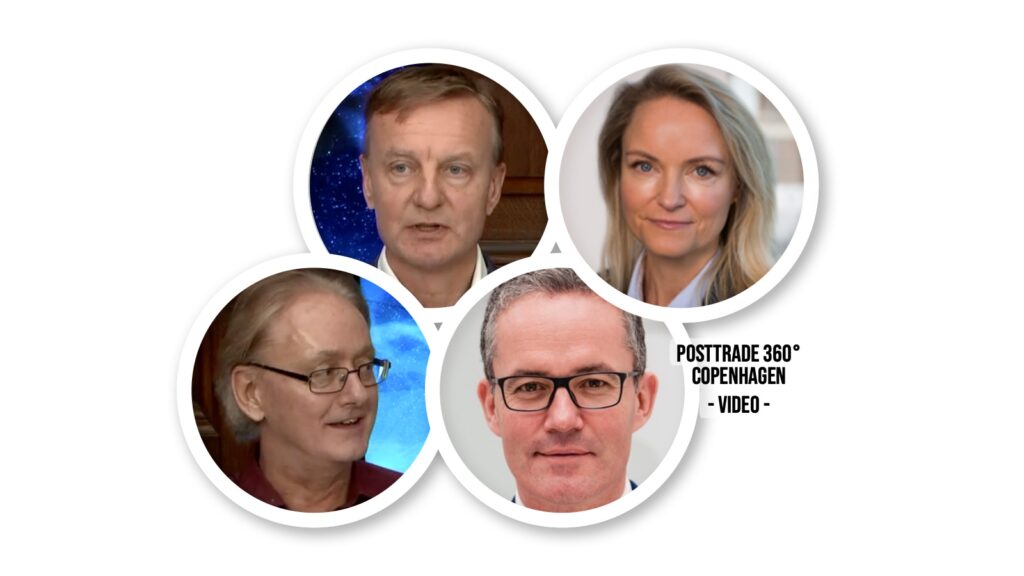 “We have a big reputational issue here to solve”

Harsh critique against the Nordics’ post-trade community at large was voiced by Danske Bank’s Michael Holmgaard Mortensen in this senior future outlook panel of September’s PostTrade 360° Copenhagen conference. All in all, however, the participants seemed carefully optimistic about chances of gaining badly needed economies of scale – as European harmonization picks up, possibly. Now we publish the full-session video here.

[This is an expanded update, now with the video, of the original news post from the second conference day, 24 September.]

The future of Danish post trade was the topic as four senior nationals in the area went onstage at Axelborg on 24 September. The recent acquisition by Euronext of the country’s CSD formed part of the backdrop.

The session was moderated by Hugo Sundkjer, head of capital markets at TietoEVRY, on link from Oslo.

The challenge of scaling post-trade processes – and the possible pains and gains that harmonization with Europe and the world could bring – became a recurring theme in the discussion.

Jørn Strunge advocated that infrastructure functionality should be standardised rather than localised.

”What we have seen, post the T2S migration in 2018, is that these special features don’t have to be built in the infrastructure, but must be built in the applications in the banks. We will need a cleaner way to do our clearing and settlement – and therefore we think we will have to follow the international standards and harmonisation,” he said.

Maria Hjorth said that VP Securities will be investigating scale advantages that could stem from the Euronext acquisition, but added that it is still too early to predict just how.

“A professionalism that we haven’t seen”

The need for aggregation of activities, for example through outsourcing collaborations, was discussed, though Danske Bank’s Michael Holmgaard Mortensen pointed to the difficulty of even measuring actors on scale across today’s “spider-web” collaborations. Overall, his company is open for outsourcing agreements wherever there is scale to be gained – and seeks to digitize anything that can possibly be digitized.

Michael Holmgaard Mortensen was partly very sharp in his criticism of how the region’s post-trade setting has worked so far:

“What has been really important for us, in bringing in Euronext, is that they come with a professionalism that we haven’t seen,” he said (after the white dot at 36:40 in the player time bar).

“I honestly think the international community is looking a little bit at the Nordics as a place in the post-trade industry where we don’t have too good a grip on things. If we then doubt them, we can remind ourselves of the T2S thing in Denmark, there are certain other incidents, delayed projects … I don’t want to ramp up the whole thing, but we have a big reputational issue here to solve.”