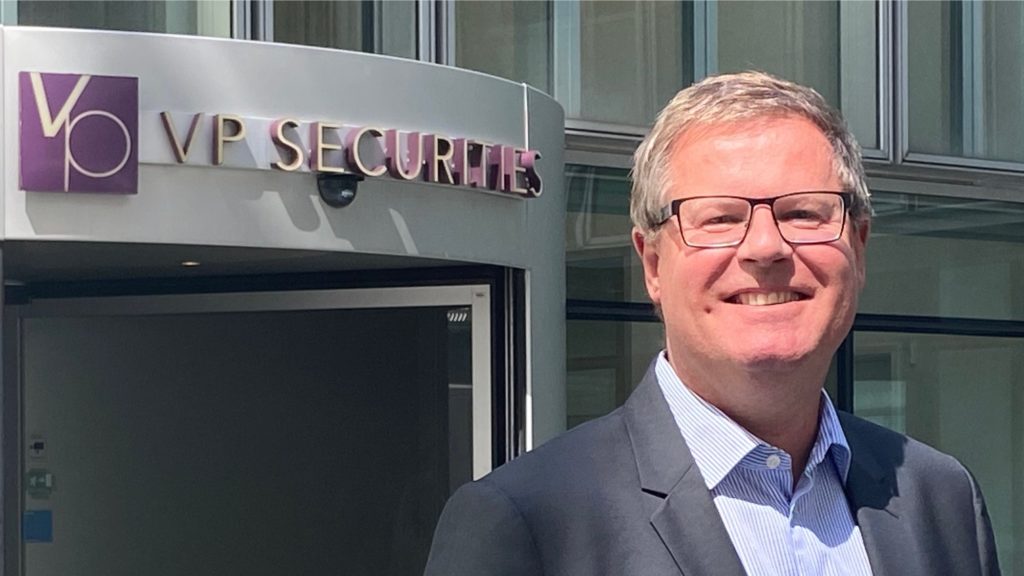 Niels Olsen: “We will have more on the plate”

[In the PostTrade 360° Web Summit on 3 June, VP Securities CEO Niels Olsen will take part in a panel with his Nordic CSD colleagues at 10:00 CEST. Sign up for the conference here, free of charge.]

Expanding the CSD service offer, adding scale in the tech race – and getting to share organisation with a major exchange operator …
Interviewed by PostTrade 360°, Niels Olsen, head of Danish CSD VP Securities, describes his nation’s market participants as “quite excited” about the strengths that come with Euronext’s ongoing takeover of his organisation.

“This will bring us new services that we can discuss with the Danish market – we just don’t know which ones yet.”

VP Securities CEO Niels Olsen is putting scale synergies, including the service portfolio scope, at the centre of the broad improvements that he thinks will be enabled by VP Securities’ integration into Euronext.

Actual coordination is not permitted until the deal has been cleared with supervisory authority Finanstilsynet, whose license to Euronext is expected later in the summer.

“Right now we are in a kind of get-together phase, you could say – continuing to share the information that was also in the ’data room’,” says Niels Olsen, describing the current dialogue as focused on questions from Euronext and answers from VP Securities.

Next: Catch the synergies

Upon the go from Finanstilsynet, a “design phase” of a few months will then lead up to the concrete activities to integrate VP Securities into the existing Euronext organisation. A reasonable bet is that close contact will be established with the group’s two existing central securities depositories (CSD): Portugal’s Interbolsa and Norway’s VPS.

“In general, developing services is expensive for a standalone CSD to do. Denmark is small in relation to the rest of Europe,” says Niels Olsen.

“As part of Euronext we will be able to leverage on products and services already developed.”

Covering the middle ground between core exchange services and core CSD services with complementary offers is not new in principle – but here, too, Niels Olsen sees advantage in the combination. It could potentially strengthen or broaden existing issuer services.

“Issuances are the raw material for a CSD so it is important that we keep developing services for issuers.”

The industry’s development is lowering the thresholds for tailored cross-border solutions. An example could be a Danish corporation, issuing SEK-denominated debt – listed for trade on the Oslo exchange.

The takeover agreement between Paris-based exchange operating giant Euronext and the Danish CSD was signed on 23 April – adding to Euronext’s Nordic expansion which started with the acquisition of Norway’s CSD and national exchange Oslo Børs VPS about a year earlier.

“As we have expressed clearly, we are quite excited about this,” Niels Olsen exclaims.

Our previous interviews with VPS head Audun Bø and with Euronext group CEO Stéphane Boujnah discuss in detail how this follows Euronext’s strategic realignment to grow not just in the Nordics, but also generally in the post-trade area (in distinction from exchange operations as such).

“We will be the 3rd CSD in the group, reflecting the active decision by Euronext to be strong in CSDs and showing their commitment to the Danish and Nordic markets,” says Niels Olsen.

Under liberalising legislation by the EU, notably the CSDR framework currently being implemented, central securities depositories are effectively moving from being national monopolies towards becoming open-market actors in international competition. The sophistication of the IT systems that are needed for efficient processing, and for the real-time transparency that clients desire, could make it challenging for small actors to keep up in the investment game. (PostTrade 360° has previously written about the similar challenge for custodians, with the example of SEB.)

“The industry faces massive investment in IT. Those who win this game will be the ones who are willing to invest in technology and scale,” says Niels Olsen – concluding that is therefore great for VP Securities to join a big group with lots of knowledge in technology.

Out of the 200 people in his own company, half work with technology. While the new group organisation is yet to be planned, he is convinced that his staff will be bringing a lot of valuable IT and business knowledge to the Euronext table. As evidence, he points to three recent accomplishments: integrating the euro into the Danish market in 2016, pioneering the pan-European T2S settlement platform already in 2018, and securing Europe’s second CSDR license early in the same year.

So how about the cultural transition – going from one-site independence to a pan-European group structure? Niels Olsen thinks the coronavirus restrictions may have had the positive side-effect that they have made remote collaboration normal.

“We have been trained the hard way now – which will help us be ready to start this way of working across Europe,” he says.

“The last months we have worked with 90–95 percent of the staff working remotely. It has been a lesson learned and we will be doing more of it going forward.”