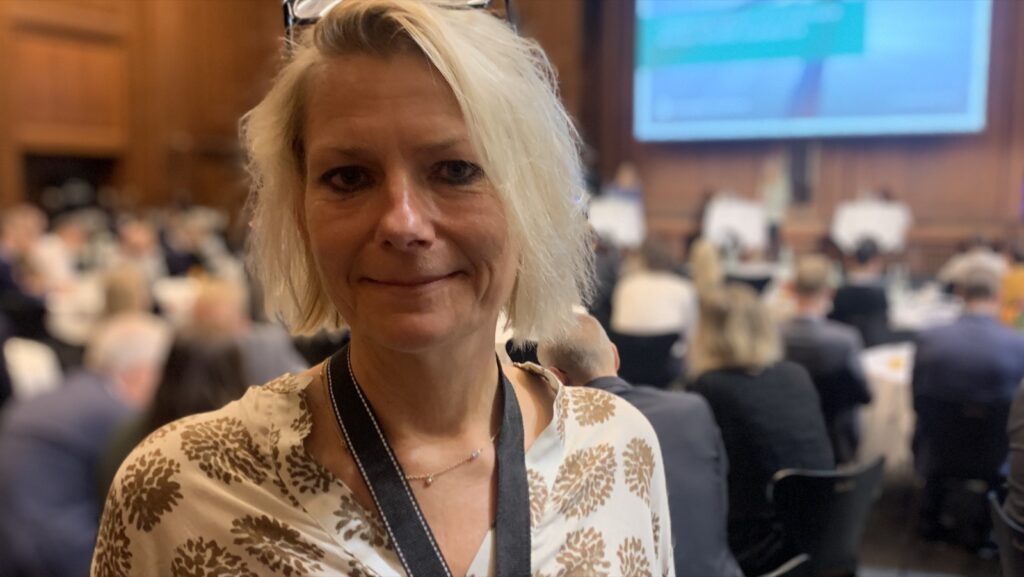 VIDEO | Uniquely Danish configurations, on age-old platforms … The setting for entering the future could hardly have been more challenging. On stage with PostTrade 360° Copenhagen on Wednesday morning, Capital Market Denmark Secretary General Helle Søby Thygesen presented the outcome of the industry’s coordinated multi-year project of taking the full grip on its future.

Her compact 20-minute session covers the strategic objectives of Denmark’s determined post-trade makeover, as well as how the implementation work is set up, and details on three of the specific projects which are underway. Capital Market Denmark is part of the general industry organisation Finance Denmark.

“Materialising the strategy requires commitment throughout the sector – and we have that commitment,” says Helle Søby Thygesen, on stage with PostTrade 360° at Copenhagen’s Axelborg on 21 September. In fact, she rates her post-trade steering committee as the most dedicated committee she has worked with through her 25+ years in the sector.

Standardisation, European harmonisation, and scalability, are keywords of the vision.

“The use of international standard solutions will ensure a high degree of flexibility for individual infrastructure providers. That is a prerequisite to make sure that the Danish capital markets are competitive,” says Helle Søby Thygesen, adding that they need to be relevant to supporting the EU’s Capital Markets Union.

PostTrade 360° described the background last year, through this interview with Michael Holmgaard Mortensen of Danske Bank, member of a three-year high-level industry task force for post trade which was just finalising its task of lining out the strategy and reporting on the needs. The current steering committee has succeeded it, being responsible for making it happen.

“We need to restore the confidence”

“The post-trade sector has been underinvested for many years – and that’s not just a Danish or European thing, that is a global thing,” Helle Søby Thygesen explains, setting it in contrast to the front office area, to which a lot of investment has been channelled over the past 15 years under the implementations of MiFID and MiFID II.

“The problem is that when you underinvest, that leads to short term solutions. And then, of course, you can also see the challenging T2S migration … we all know about that … leading to a sub-optimal use of the T2S platform. With that in mind, we had, you know, compromised the customer confidence in the Danish market,” she says.

A broad flora of working groups was simplified into just four. One on clearing and settlement, and one on corporate events, are currently central to executing on the strategy.

Some deadlines are tight. To operate with the Eurosystem Collateral Management System (ECMS), it will be necessary to comply with the standards of “SCoRE”, the Single Collateral Rulebook for Europe.

“So, for instance, being able to use mortgage bonds as collateral, will require compliance with the SCoRE standards, and that’s in 2023.”

Helle Søby Thygesen lists three projects that she sees as most important right now. One is on unilateral transfer of securities, as CSDR requires the receiver to accept a securities transfer before it can take place. The consent will be an “active match”, on free-of-payment terms. The second project relates to the transition from three messaging standards to just one, at the country’s CSD, Euronext Securities Copenhagen – preferably ISO 20022.

“That is a huge task for the data centres, so it’s not something that we’ll do tomorrow. It requires a long-term plan, in phases. And we need to set that plan together with Euronext Securities Copenhagen and the data centres.”

The last of the three projects looks into the possibility to “offer omnibus accounts on attractive terms”. The so-called omnibus account structure for securities at the CSD is the most common throughout Europe, though Denmark and the other Nordic countries have a tradition of “segregated accounts”.

“It’s not that we can’t use the omnibus accounts, we use that for foreign securities. But we face some practical barriers, which we need to handle.”